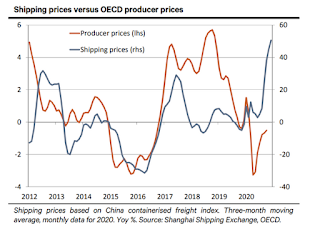 While most countries' economies will shrink as a result of the coronavirus crisis, China's gross domestic product is expected to grow 1.9% for 2020. The country reopened quickly after its lockdowns and got its economy back on track faster than most.

That is great news for companies that sell to China. Data from the investment bank Evercore underscores the point.

The firm runs a weekly survey of 21 U.S. companies -- one-third manufacturers of capital goods and chemicals and the rest in consumer products -- that export to China, or sell within the country. A "sales to China" index it generates from the data fell to less then 35 in March, but has trended higher since then.

Evercore doesn't disclose which companies it surveys, but a strengthening Chinese economy is a powerful benefit for companies with considerable sales there.

Apple's long-term earnings growth depends on its fast-growing and higher-margin services business, but rebounding Phone sales offer a near-term benefit as well. The stock recently jumped in response to news that Apple now plans to produce 96 million iPhones in 2021, for a 30% year-over-year increase.

The Wall Street consensus calls for Apple to sell 215 million iPhones in 2021, for revenue of $165 billion. The revenue figure would amount to an increase of 20% year over year, but Wedbush Securities analyst Dan Ives tells Barron's that sales estimates are now bound to rise. Much of the apparent strength in demand is coming from China, he said.

"China is tracking above expectations" for the current quarter, Ives said. Apple gets roughly 7% of its revenue from China, according to FactSet estimates, but 20% of iPhone demand is China-based, Ives estimated.

Sales in China account for 16% of Nike 's (NKE) revenue. Expectations that sales there will increase 17% in the fiscal year ending in May have helped the stock to almost double the percentage gain on the S&P 500 since March 23. The stock has also benefited, of course, as higher-margin direct-to consumer sales account for a bigger portion of revenue.

The casino operator Wynn Resorts (WYNN) receives 70% of its revenue from Macau, the former Portuguese colony and gambling hub, which depends on visitors from the mainland China. The stock is up 167% from its March 18 bear-market low.

"Investors see stable-to-slightly better growth in China next year as they have fewer headwinds from COVID currently and are a beneficiary of global growth and stimulus," wrote Oscar Sloterbeck, macro research analyst at Evercore, in a research note.

Write to Jacob Sonenshine at jacob.sonenshine@barrons.com