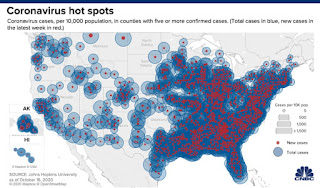 Here's what you need to know about the impact of Covid-19 to navigate the markets today.

-- The House of Representatives meets at noon on Sunday to vote on a government funding and Covid-19 relief package, with leadership warning members that voting could continue late Into the night. The Senate will then take up the package after the house votes. Lawmakers have until midnight to strike a deal funding the government to avert a shutdown. After it appeared that language limiting the Federal Reserve's emergency landing powers might sink a deal on coronavirus stimulus, a compromise was reached late Saturday. Currently lawmakers are attaching the approximately $900 billion coronavirus relief package to the government funding bill, although if talks break down on the larger measure another stopgap government-funding bill could be passed to give Congress a few more days to break the months old deadlock on stimulus.

-- The US airline industry is set to get $15 billion in aid as part of the coronavirus stimulus package that Congress continues to hammer out, CNBC and Reuters reported. The aid would be earmarked to pay workers and the airline industry would have to bring back to work the more than 30,000 employees that were furloughed in the fall as previous aid expired and the much-anticipated surge in air travel never materialized. An earlier $25 billion aid package for the airline industry to help pay workers wages expired at the end of September, and the currently proposed package would run through the end of March.

-- Some European countries are banning travelers from the U.K. because of a more contagious strain of Covid-19 that is emerging in Britain . The Netherlands began banning flights from the UK on Sunday, as did Italy. Belgium put in place a 24-hour ban on British travelers arriving by plane or train and that restriction that may be extended. The more transmissible strain of Covid-19 prompted British Prime Minister Boris Johnson to order additional lockdown measures, putting in place a new stay-at-home order and dramatically limiting travel in and out of London and other parts of southeast England on Saturday.

-- California set a record for coronavirus cases, reporting over 53,000 cases on Friday as hospitals in Los Angeles County reported the highest number of Covid-19 patients yet during the pandemic. The current level of reported infections in the state is now about five times higher then it was during the previous apex during the summer and 10 times higher than during late October. The rise has caused Apple, which is just now rolling out its new iPhone 12 and AirPods Max headphones, to temporarily close all of 53 of its retail stores in the state.

Write to Ben Walsh at ben.walsh@barrons.com