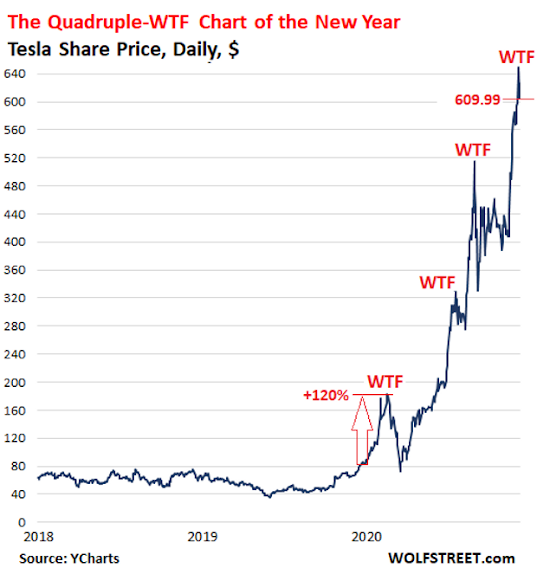 A decade later and a $5,800 flyer in an upstart electric-car company would have turned a savvy or lucky investor into a millionaire. Or, in Brandon Smith's case, an initial investment of $10,000 in 2017 along with some small additional purchases along the way did the trick.

Earlier this month, Smith celebrated his "TSLA-naire" status in a tweet:

Smith, who doesn't even own a Tesla (TSLA) vehicle, is one of countless fans who have pledge their undying devotion to Elon Musk and, to this point, have been rewarded handsomely for sticking to their plans.

Tesla shares have exploded for a gain of nearly 700% this year, having gotten a recent boost from joining the S&P 500. But a blockbuster 2020 is merely another chapter in the volatile journey to eye-popping returns.

While Tesla bulls shrug off the naysayers, others, like Wolf Richter of the Wolf Street blog, who points to this "quadruple WTF chart of the year (https://www.marketwatch.com/story/tesla-bear-puzzles-over-the-quadruple-wtf-chart-of-the-year-11607903595)" as a warning sign, continue to raise alarms that the momentum can't last:

Nevertheless, if Tesla longs had listened to the doubters along their incredible journey, they wouldn't be in the position they find themselves in today: Relishing their freshly minted "TSLA-naires" status.

Bloomberg used this chart for some insight into that journey:

So, $5,800 a decade ago is worth $1 million now. Perhaps even more amazing is that $127,600 a year ago has reached that sum, as Tesla has ridden five straight quarters of profits and plenty of hype to new heights.

At last check, Tesla was trading in the green, while the Dow Jones Industrial Average , Nasdaq Composite and S&P were also higher in Thursday's shortened trading session.